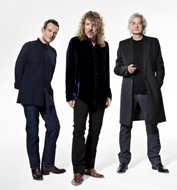 Add artists/groups into Favourites, and get the latest information!

With a slew of recent reissues, live albums and DVDs celebrating the 35th anniversary of the band, Led Zeppelin is proving that its legacy lives on today. Here we look at the path of one of the greatest bands in rock history, which played a crucial role in defining hard rock and heavy metal.

Led Zeppelin was formed in 1968 by guitarist Jimmy Page (b. January 9, 1944), bassist John Paul Jones (b. June 3, 1946), vocalist Robert Plant (b. August 20, 1948) and drummer John Bonham (b. May 31, 1948). The band first under the name the New Yardbirds, because Jimmy Page was left with the rights of the split Yardbirds, the band he had led for several years after stepping in for Jeff Beck. Page one day discovered Plant singing in a local rock band and was taken by his voice and stage presence. Plant, along with his friend John Bonham, immediately joined New Yardbirds for the band's remaining tour commitment.

After the successful tour, the band was renamed "Led Zeppelin". It was the Who drummer Keith Moon who came up with the moniker, inspired by the band's demo tapes to recall the burning down of Zeppelin. The four Englishman went into the studio and their self-titled debut album was recorded. 'Led Zeppelin', released 1969 via Atlantic in US, immediately became a huge success, reaching No.2 in UK and No.5 in US. While continuing on an extensive world tour, Zeppelin released their second album, 'Led Zeppelin II', which ruled the UK chart for seven weeks, pushing the Beatles' 'Abbey Road' off their familiar No.1 position. With sales boost from hit single 'Whole Lotta Love', the album also sold over 3 million copies in US and established the band's status as top rock band.

Their third album 'Led Zeppelin III' marked a departure from their previous blues-influenced hard rock sound, with focus on their homeland's folk music. The songs were written in a mountain of Wales by Page and Plant after 15 tiring months of concerts. It resulted in a mix of their trademark hard rock and acoustic sounds. Their career reached the height in 1971 with their fourth untitled album (commonly referred to as 'Led Zeppelin IV'). With their classic tunes 'Rock & Roll', 'Stairway To Heaven' and 'Black Dog' on it, the album became the band's biggest commercial success, selling more than 16 million copies worldwide to date.

Their fifth album, titled 'Houses Of The Holy' debuted at the top of the charts in UK and US to become their second best-selling album. The set was so inclusive that virtually any kind of musical influences such as reggae, funk and folk ballads were recognized. The tour in support of the album was later filmed in the rockumentary 'The Song Remains The Same'. In 1974, they founded their own label, Swan Song and released double-disc 'Physical Graffiti' (1975), 'Presence' (1976) and 'In Through The Out Door' (1978).

Suddenly came the band's finale. During the rehearsal for the American tour in support of 'In Through The Out Door', John Bonham was found dead of acute alcoholism after a drinking binge. On December 4, 1980, the band announced its decision to break up, saying "Led Zeppelin could not be a band without Bonham'.

Over two decades after the band's demise, their music still has a great influence on fans and musicians of every generation. On eight studio albums from 1969 to 1979, Led Zeppelin reflected most of the spectrum of music beyond hard rock and heavy metal. That is their legacy, with which we continue to be blessed.